Generally in IoT, the sensors communicate with the IoT platform through a low power wide-area-network (LPWAN). These types of wireless networks are designed to allow long range communication at a low bit rate in order for battery operated sensors to be connected easily. The low power and low bit rate are unique for this type of network compared to a wireless WAN that is designed to carry more data, using more power.

For this network Aloxy can use different protocols such as LoRaWAN and DASH7. There is no silver bullet technology therefor depending on the application and site specifics we suggest to review different protocols. Aloxy can assist as an independent party to review and access your requirements and also assist with implementations.

Both LoRaWAN and DASH7 can use the 868 MHz band in the EU (CEPT) or the 915 MHz band in US, in other parts of the world other frequencies apply but the Aloxy sensor can be programmed to the appropriate frequency depending where it is deployed.

"There is no silver bullet technology, and this is certainly true in industrial IoT"

LoRa allowes for long range data transmission. The higher the spreading factor (in LoraWAN) or the lower the data rate (DASH7), the longer the range. Due to a typical higher data rate of DASH7 the maximum range is shorter than LoRaWAN, however the tradeoff against the reliability of the network needs to be taken into account. 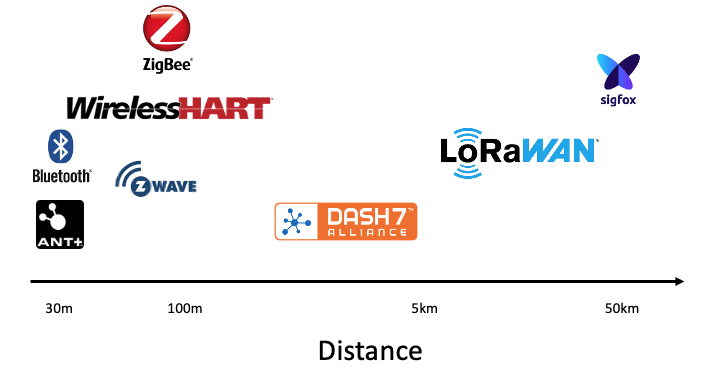 Different type of gateways can be used by thirdparty suppliers to connect the Aloxy sensor to the network.

A network server is required to manage the gateways and devices, it can be deployed on premise, hosted in the cloud (private or public), or hosted externally by a third party.

The network server has a large impact on the behavior and performance of the network in terms of scalability, reliability and power consumption.

The Aloxy IIoT platform has the possibility to have the network server integrated into the Aloxy services. Only by being in total control of the network stack, Aloxy can deliver the best SLAs to its customers.

Latency is non-deterministic for both DASH7 and LoRaWAN meaning it is not possible to fully predict when a message from a sensor can be delivered to the application. LoRaWAN and DASH7 use different technologies to realise channel acces leading up to differences in Latency. In case of a collision (package is not received), worst case in LoRaWAN (SP12) is about 3 minutes before a new package can be transmitted. For DASH7 worst case (lo-rate) this will be 100ms.

Reliability is maybe even more important, how certain can you be that a package is received by the gateway. The amount of traffic has an impact on the number of collisions. There are different ways to avoid collisions. Another way to increase reliability is to request an acknowledgement (ACK) that the package was received, however it is important to take scalability and therefor the number of sensors, messages and gateways into account. A LoRAWAN network is more limited in scalability due to regulations and longer air time of the packages which impact the available receive time of the gateways.

Power consumption is determined by the amount of time the radio is in transmit or receive -mode and the transmission power. Therefor the network architecture and quality are directly related to the power consumption of the sensor.The bit rate (kb/s) determines the length of the transmission, a lower rate increases power consumption, this is mainly were we see the biggest differences between network protocols, see table.In LoRaWAN a Spreading Factor is used by the gateway (SF7 up to SF12), each step in SF doubles the transition time and therefor increases the battery consumption, SF7 being most economical. The Aloxy IIoT platform displays SF and average SF allowing you to optimise your network and reduce battery consumption. However most networks utilise automatic data rate which optimises the network but has a huge impact on energy consumption. 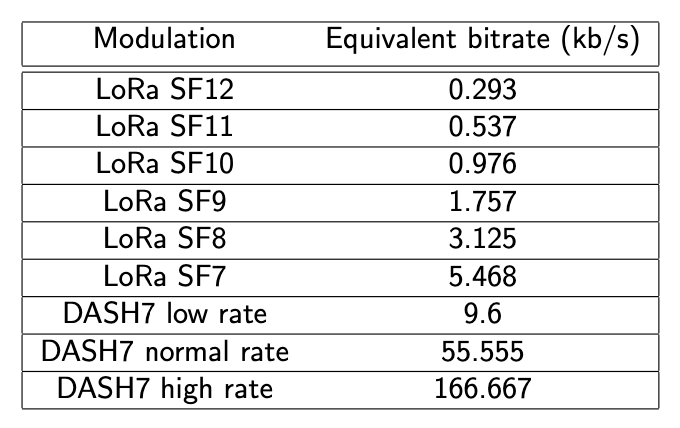 Prof. Maarten Weyn and Glenn Ergeerts are both founders of Aloxy and part of the high level technical team at Aloxy.

‍Maarten Weyn received his Ph.D. in Computer Science on the topic of Opportunistic Seamless Localization from the University of Antwerp, Belgium. He is an Associate Professor at the University of Antwerp, currently teaching the 3rd year bachelor courses Mobile Communication and Telecommunication and Master courses Communication Systems, and Internet of Things: Low Power Embedded Communication in the department of Applied Sciences: Electronics-ICT, and in the postgraduate Internet of Things, the course on Context Aware Wireless Embedded Systems.
Maarten is instructor at the LoraWAN Academy on the topic of localization and lecturer in a few courses on Coursera on Embedded IoT systems.

Glenn Ergeerts graduated as a Master of Applied Engineering in Electronics-ICT. He is the main developer of OSS-7, an opensource DASH7 implementation and member of the Protocol Action Group of the DASH7 Alliance. He is a technology enthusiast with a broad knowledge of IT going from ultra low-power microcontrollers up to cloud computing. As part of the research group, he is currently working as a software architect on different projects using RTLS and NFC technology. The current research focus is on sensor processing using distributed systems for applications like RTLS. This ranges from developing a DASH7 stack on low-power microcontollers for sub-1GHz wireless communication to designing real-time aware cloud computing systems to process the sensor data.

Thank you! Your submission has been received!
Oops! Something went wrong while submitting the form.